Hail Greyhawk mavens! I was scrolling through some of my old Greyhawk Comics scrips recently, and there are some where the annotations at the end were full on blog posts. This is what led to Greyhawkery of course. Let's go way back to July 2009 and see a fun strip celebrating the linguistic depths of D&D and the Greyhawk setting. You can read the comic in its entirety below or follow this link if you want to go back and read other installments. Enjoy!
July 23th, 2009: 'Ware and were, friends! The World of Greyhawk has a long tradition of using obscure words, unique terms and especially keen, setting specific expressions in its publications. How then did poor Mayaheine fare when Pelor came along, picked her out of her home plane and dropped her off on Oerth? Check it out. ;)

Be sure to see the annotation at the end of this one. ;)
-mortellan 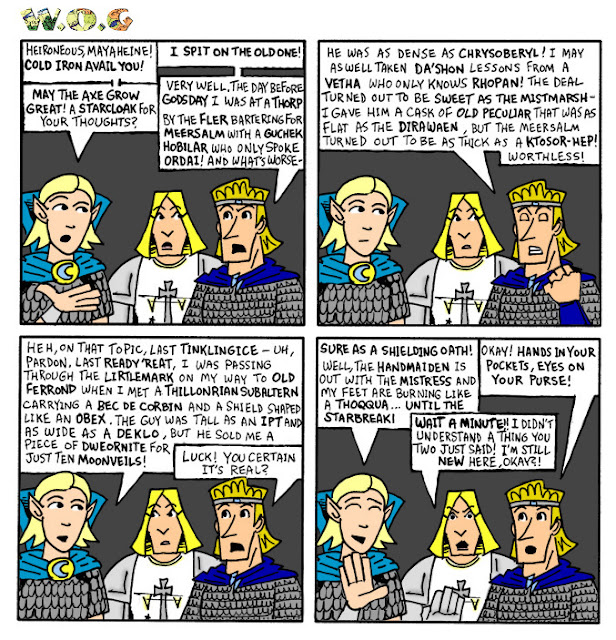 No games here. If you knew all the bold terms above, then you are a hardcore Greyhawk fan indeed! But just in case I have friends and family reading this, here is a glossary:

Well, I knew all the real world terms and about half the setting-specific ones, so I guess I'm somewhere around a C student. Mostly comprehensible based on context if you know even some of the references.

Did not know chyrsoberyls were particularly dense as gemstones go, though. Really hard (they're over an 8 on the Mohs scale IIRC) but that doesn't always imply high density.