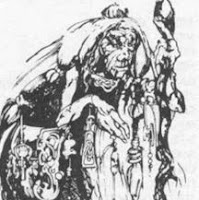 I'd like to thank Scott Casper for pointing out an advert over at Paizo for a cool new Reaper brand miniature of the most classic witch in D&D, Baba Yaga. The author's blurb of course relates to her new role in Pathfinder's world of Golarion (she is a plane-hopper), but it also possibly contains a reference to her being the mother of another famous spellcaster...

"Baba Yaga has appeared in many flavors through the years of fantasy roleplaying games, and though my favorite incarnation of her is as the mother of one of my beloved spellcasters, her icy grip on the nation of Irrisen cannot be denied. Lovingly sculpted by those fine folks at Reaper, this miniature is sure to make your PCs shake with fear as she raises a withered finger at them from the door of her chicken-legged hut, or from her flying mortar and pestle!"

Anyone who has ran Greyhawk during the Paizo era would know this refers to Iggwilv. There was some question in the Greyhawk community as to when Iggwilv and Baba Yaga, similar witch figures, became distinct characters and related to one another. Here is my semi-long answer.

Starting in Roger Moore's The Dancing Hut module from Dragon Magazine #83, Baba Yaga had two adopted daughters who were both trained to be spellcasters. One was called Elena the Fair and the other Natasha the Dark. If I recall, the module even went as far to say Baba Yaga dropped these daughters off on other worlds to spread trouble. This was key because it gave a perfect tie to Greyhawk then as there was already a little known NPC spellcaster at the time called Tasha (she of the Hideous Laughter). Despite an anecdotal story of how Gygax's Tasha got her name, it was later revealed in Dragon #359 that Natasha was indeed Tasha, a former member of the Company of Seven, Zagig Yragerne's adventuring company from way back in the day. Na/Tasha being witch-trained and quite powerful, could only be one person: Iggwilv who already was known for using aliases (Hura, Louhi). And in this secret guise she used the mad archmage for his knowledge and craft, soon departing with the ability to write her infamous Demonomicon and trap greater beings such as Graz'zt. The rest of Iggwilv's history (both in the RPG setting and in novels by Gygax) easily slides right in after that, birthing a demigod, a vampiress, conspiring against Greyhawk and so forth. Ol' Baba Yaga would be proud.
Posted by Mike Bridges at 1:55 AM

Yeah it seems she started the witch tradition on Oerth. Please don't tell Aeolius he'll think she is a hag. You know how much he loves his hags.

Baba Yaga of the Sea. Yikes!