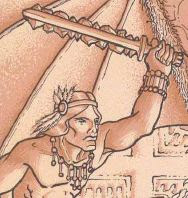 Be warned reader, this episode of the Sea Princes' ongoing adventures contains spoilers for the classic module C1: The Hidden Shrine of Tamoachan. Last time, the crew had fell through the ground and ended up beneath the ruins of an ancient Olman city. Unfortunately they would not have much time to explore; poisonous game permeating the whole dungeon threatened to end the lives of our protagonists:


Araxo, Henri and their guide came upon the cavernous lair of a near-nude nereid named the Child of Zotzilaha. The glowing unearthly woman urged the trio to come closer so she could welcome and gift them with a kiss. The scheming lieutenant and his shipmate were wary having never been that close to a woman without paying for it. They sent their Olman guide to test her intentions. Lightly kissed, the Olman wandered off in a happy daze but alive. She then pouted that the other two were spurning her advances. Araxo gave Henri a signal and they both approached her in a flanking position together. Drawing their blackpowder pistols they intended to sneak attack her but suddenly found that up close, their will was not strong enough and she was too beautiful to harm...


Meanwhile in a large water-logged hall of pillars, Cuahto, Victor and Pickles followed trails of silver slime on the walls and waded up to a glowing object. It was exactly what they expected, a giant slug. Much like before when they met the crayfish and crab, this giant creature turned out to be sentient. Turning its eyestalks toward them it introduced itself as Tecuziztecatli the Lord of Snails. In a surprising turn Cuahto spoke to it in Olman and asked for the way out of the dungeons to which the Lord of Snails obliged by pointing them toward the lair of the Child of Zotzilaha. Nothing of value was discovered and they left down another hall just in time to hear a gun shot...
Henri struggled to fight the allure of the nereid and in doing so incurred her anger, so she spit in his face causing temporary blindness. Henri fired at her wildly missing her and Araxo luckily. The Child then surged backward into her pool of water and sent a roaring wave to buffet all three away from her. By this time the others had hurried up toward the booming sounds to find their compatriots and the lurking woman. This time they asked for a way out, knowing the gasses would soon kill them. She agreed to allow them across her pool to a door provided they give her gifts. Without hesitation Vic gave up an earring, Cuahto and armband, and best of all Pickles, mesmerized by the aquatic beauty offered her the humble gift of a chocolate covered starfish which both confused and touched her. She vanished under the pool and the party waded over to the exit.
Eventually they came upon a hallway with huge decorative animal heads every ten to twenty feet. One of them, an eagle head had a gold bracelet stuck inside its open beak of a mouth. Cuahto, ever the fearless, reached in to pull it free and had the beak snap shut on his arm. Painfully he tried to extract his arm (the others offered to cut it off), but ultimately Lt. Tydan oiled the hinge of the beak and Pickles pried it open with his freakish strength. A bit bruised but in one piece Cuahto and company continued down another narrow hall until thick, metal bound wooden doors slammed down ahead and behind them. Moments later the hiss of sand was heard from small holes cut in the walls. They were going to be buried alive...
Victor Hammond was weakest of all from the gas, he had even taken a potion to get him this far. Seeing the sand start to slowly fill their stretch of hall he became despondent and was ready to sit down and accept death. Pickles and the others couldn't lift the doors and the sand was pooling up fast. In a moment of desperate inspiration the crew assembled a small bomb from all their collective black powder horns. Placing it at the base of a door and bracing it with sand so the charge would explode toward the door, they backed all the way up to the rear door, got low and lit a trail of powder. A deafening explosion filled the corridor with black smoke, sand and splintered wood. They were free!
Just beyond this hall they came to a chamber with mounds of refuse and giant beetles that react to noise. At the top of the largest mound of trash they saw moonlight peeking through, it was the way out! Most of the group tip-toed up the mound to avoid the easily startled beetles and in an act of roguish self preservation, Vic Hammond punched out their guide. The unconscious Olman rolled down the mound, attracting every beetle where the man was feasted upon. Vic, Araxo and Pickles slipped out of the muddy crevasse into the vine covered ruin where the air was fresh at last. Cuahto and Henri stayed behind to rummage through the trash and find minor bits of treasure, but the noise was attracting the beetles so they finally retreated to the surface.
Once the five were free, they were soon happily discovered by Cpt. Rennaud, Olfon Trebus and Scar. With them was another Olman guide from the expedition that came with Lockard Meek. They had been searching the rubble for their lost crewmembers and any sign of the sage, only to find the guide hiding out. From him they learn that Lockard had been kidnapped by Crimson Fleet pirates and Amedian savages, then taken east through the jungle; the opposite way from their ship. Someone had tipped the pirates off about the expedition and Rennaud was keen to get back to the Seeker camp and tell Quintus Marius he had a traitor among his group. After a quick discussion, Araxo, Cuahto, Scar, Vic, Pickles and Morgan volunteered to strike off into the jungle to find the pirates. Rennaud and the rest headed back west to the camp for the Bird of Prey. Rennaud said he would sail around the Hook of the Amedio jungle, get Osprem's Kiss, and pick them back up hopefully by the time they reached the coast. Things would not go entirely according to plan...

Vic Hammond survivalist? Wonder what would of happened if only PC's were in the room?

I wonder who would of been beetle bait?

Good Q. My guess is Araxo or Pickles may have stayed to try and eat a beetle...

Hammond is too thick headed to get the jump on someone as cunning as Araxo.