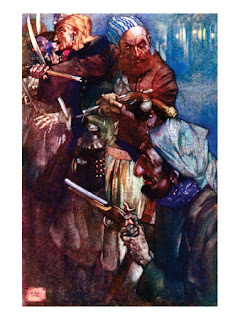 Last episode out heroes escaped from the gassy death trap of Tamoachan only to learn the sage whom they seek had been kidnapped by Crimson Fleet pirates and taken eastward. A day behind, the crew gave chase through the jungle, while Captain Rennaud returned to the Bird of Prey and promised to swing around the Hook to pick them up. Days later, Osprem's Kiss arrived on the east coast of the jungle instead, and with both Olfon Trebus and Lord Key onboard. Where did the Bird of Prey go? That leads us to our current uh...protagonists:

The desperation of the Cpt. Rennaud hit a new high when he learned from an exposed informant in the Seeker's camp that the Crimson Fleet had indeed taken Lockard Meek, the only man who could lead him to the Well of All Heals. Knowing his enemies, they would return to their haven of Scuttlecove and ransom the sage off, if he even survived the ordeal. Thus, for their own safety, Rennaud set Olfon and Lord Key off to Fort Blackwell to join Osprem's Kiss while he turned his ship west for Sasserine with the intent of buying or breaking out the pirate captain, "Ironclaw" McGrath whom he helped put in prison not long ago, for the purpose of trading for Lockard Meek. In Sasserine, Rennaud met with House Taskerhill and though he was on excellent terms the family would not part with this valuable hostage. That is when the "Blackguard" made another rash decision that would add to his infamy...

Limited in action by his curse, Rennaud hand picked an away team of five to sneak into the city and break out McGrath from a garrison prison in the Cudgel District. First he chose three former pirate crewmen; Jack, McGarnagle and Wodrick. The three had been itching for action, they knew what their former captain from the Hideous looked like, and lastly they were expendable if caught but if they succeeded the trio would be let out of their oaths to the Hold. To make sure the three didn't try anything mutinous, Billy Palsy was given a chance to redeem his criminal past by going and dependable Blonde Barry (actually bald) merely volunteered for the bragging rights. That night, armed with climbing gear and weapons, the five infiltrated by gondola through the waterways of Sasserine and came upon the Cudgel district. Lurking in the shadows of an alley outside the garrison, they grabbed a lone Cuthbertite guard who exited. Billy was dressed in the guard's livery and then throwing all stealth to the wind, they made to bluff their way in the front gate.

Posing as good samaritans who rescued a bloody, beaten guard (Billy was punched by McGarnagle to sell the ruse) the gate guards allowed the group to carry Billy inside to a nearby tower common hall. The three pirates laid the story on thick by implicating Barry and Billy's crewmates Salty Sal, Piper Kellin and Caine to the crime. Without warning the Hideous pirates jumped the gate guards; injury faking Billy and Barry had no choice but to join in or risk discovery. With a chance to stealth around the garrison in more guard uniforms and find the prison tower, the three pirates instead began their great diversion, burning down the garrison and with it the whole city of Sasserine. Two-Bit Jack apparently was a wanted arsonist before he joined the Crimson Fleet. Tapestries and tables were lit and the group raced outside to the stables, did the same thing then ran to hide in the shadows of the central manor to watch the mayhem ensue.

When more guards came running out of the smoking tower, horns started blaring, a loud bell tolled from the otherwise of the courtyard and bucket brigades began to form at the wells. The five slipped into the manor through the servants' entrance and using the hysteria of the fire to their advantage they got most of the staff to exit, except one young maid who was held back by sinister W.B. McGarnagle. Of all people in the garrison to ask where the prison was, this startled girl was the last person who would know and for this she got ran through. Barry and Billy began to get nervous as their loose cannon allies started to burn the kitchens next. Once smoke filled the back chambers, the "rescuers" proceeded into the grand hall where they were met by a warily armed band of Cuthbertite guards who were not be swayed by the bluffs and lies of the five armed scalliwags in their home. More guards raced for the stairs from the gallery overlooking the hall. The five swashbucklers were hopelessly outnumbered, so naturally weapons were drawn...

Game note: I thought since the PCs got picked to do all the away missions, that it would be more realistic if five different crewmen were given a job (though suicidal). Everyone enjoyed picking these pre-generated NPCs randomly and completely threw themselves into the new roles, some of which were pirates that their regular PCs had originally pressed into service. I think mutiny was brought up within the first five minutes!
Posted by Mike Bridges at 9:41 AM

Now you see why Araxo picks the away team that he does, those other guys are SCUM BAGS.

I agree Araxo, now I see why Osprem's Kiss neuters their men.

It read your article every thing is clear , Thanks for sharing.