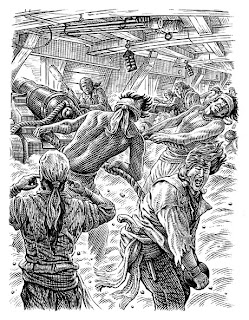 All men to their stations! The high seas adventures of the Sea Princes cruises toward a climatic finish. Last time out the crew of the Bird of Prey and the Crimson Fleet's Laughing Rake were battling it out off the shore of a tiny isle that had already seen much activity the last several weeks. That is until the privateer Lydia's Light intruded on the scene. Now Captains Hammond and McGrath have combined their forces to take down the larger ship. Things are about to get bloody. Here is our protagonists...

Loaded into a few launches the fearless and likely desperate crews of the Sea Prince and Crimson Fleet vessel rowed headlong at the advancing carrack Lydia's Light. At the lead of each assault boat was Captain Hammond, Lt. Araxo Tydan and the fierce quartermaster Cuahtehmoc, along with their rival Cpt. Ironclaw McGrath and avowed captive Sir Aris Westford. Meanwhile, the Bird of Prey rallied into firing position for their blackpowder guns. Unbeknownst to them, their lost allies Brother Pickles and Henri Morgan were aboard the opposing ship and now both sprang into action to aid any way they could from the inside. Cpt. Rynn of the Keoish privateer bellowed orders and his trained marines readied for action, while artillery crews readied to return fire. Just as the first volleys of lead shot and ballista bolts were away, dodgy Morgan reached the bottom of Lydia's Light and using everything at hand to temporarily disable the rudder. The ship gave a shudder and men were thrown off balance as the ship listed in the wrong direction, leaving them exposed to a deadly broadside from the Bird of Prey. Meanwhile, Brother Pickles raced to sabotage the privateer's cannons and as he was ready to cast a lamp full of oil at them, the ship rocked and he fell to the ground at the feet of a burly gunnery sergeant. The lamp broke anyhow and the oil went trickling into around the feet of the gunners, even as the burly man picked up the touched cleric to thrash him. 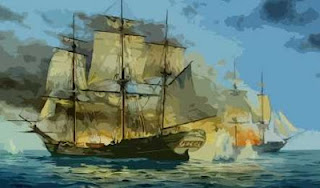 Under cover of smoke and whizzing lead, the launches reached the side of the crippled Lydia's Light. Hooks and ropes were thrown up and the boarding crews climbed aboard to face the readied Keoish soldiers. Far off at the rear castle by the wheel stood Captain Rynn, resplendent in his white uniform and tricorn hat, fired the first shot and killed the first pirate aboard. Among the first wave came the tattooed savage Cuahto whose own black powder pistol roared and dropped the quartermaster of the privateers. This death gave the skittish crew some pause and more pirates managed to surge over the side. Araxo Tydan keeping in cover grabbed a line and sliced it, sending a sail down over the heads of many of the crossbowmen at the same time he hung on to the other end and rose to the mast crossbeam.  Cpt. Hammond filtered in with McGrath and the deadly mercenary Snorri. Cuahto evaded a counter attack of Keoish blades and climbed up the same mast as Araxo. Last among the boarders came the reluctant knight Sir Aris. Though sworn to aiding Rennaud's quest he also adhered to the code of chivalry. His blade was out but none among the privateers would challenge him, though his presence on the other side caused them anger.

Below deck, Pickles wrestled with the master gunner and even enraged neither gave up ground. At the rear part of the ship Morgan ran into a room and stepped out a narrow window to daringly climb up the back side of the ship under cover of smoke. Cuahto and Araxo both took to the rigging and swung over the raging battle below as crossbow bolts flew at them from the stern. The wild ranger landed amidst them and began hacking away, downing another officer, while Araxo came circling around overhead to kick Cpt. Rynn in the arm so hard he dropped his saber and was dashed over the rail and into the drink. Rynn's body nearly hit Morgan as he was coming over the side and all he could grab onto was a nearby ballista. The siege weapon was bolted to the rail but it swung around till the rogue was now precariously hanging off the aft of the ship. Back on deck, Aris and McGrath waded through multiple melees toward the stern, while Victor Hammond, seeing the tide turn in their favor with the loss of their command, called on his allies to give quarter to the Keoish sailors if they would surrender. Just as Cpt. Hammond turned around, a marine's lucky strike scarred him over the eye, only to be answer by an impaling thrust.

Feeling victory at hand, Araxo looked over the side to see where Rynn landed in the water, and dove in after him blade in hand. Morgan hung onto the perch tightly as the Bird shook the Light with another closer volley of fire. A mast was shredded and fell partly on Cuahto and two Keolanders. Below deck, the return fire of the privateer ship was foiled as the ship shook and Pickles got free to take a fire to the lamp oil, sending the Light's powder keg up in explosive flame. Pickles was thrown back, then sat up ears ringing and covered in soot. Old Cpt. McGrath lifted a cross beam off Cuahto and helped him up just as Sir Aris reached the rear castle and aided Victor in calling an end to the melee. The knight's presence assured the wary privateers that their lives would be spared from the pirates. Cuahto then leapt into the water to give aid to Araxo who wrestled in the debris filled water with the commander of the privateer. Now double teamed by two knife wielding fiends, Rynn surfaced for air and croaked his surrender, but Araxo had not heard Vic's orders to give mercy and with Rynn's guard let down the shady first mate stabbed him dead in the water. The battle was over and the victors cheered resoundingly cheering the names Hammond and McGrath.

Most of them at any rate. Morgan landed on the sill of a window to one of the officer's quarters and saw two opportunistic crimson sashed pirates about to pillage the priestess of Lydia, Aurora. At that same moment Pickle's hearing returned and the cries of the woman who had been so kind to him came to his ears. Rushing into the chamber he confronted the same two pirates and struck one down. Morgan climbed inside the chamber with his pistol but it went off accidentally shooting himself in the leg. The second pirate went to stab the wounded rogue but was shoved by Aurora from behind and out the window. She then ran to Pickles' arms soot and all. In the heat of the moment Morgan's wound was but an after thought that she apologetically healed for him. The pair walked up on deck with the priestess while Araxo and Cuahto were pulled up from the sea toting Rynn's body. The Bird of Prey's most daring comrades were reunited at last! Everyone had stories to share, but they had to wait for there was still much work to be done after the taking of Lydia's Light at the "Battle of Maroon Lagoon".

Game notes: The guys did great in this multi-layered battle. Some of them played more than one role while others made the most of their primary characters. Never in my DMing career, have I scripted a more tangled series of events toward a climatic, cinematic battle. This campaign, near it's end, is already my new favorite of all time. 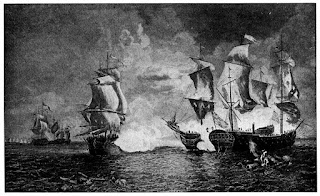 My favorite too. We should probably quit on a high note... NOT.

I wonder, could we do an extended series of GH campaigns that entirely revolves around seafaring and coastal nations? I think it would be easy to stay away from the megadungeon scene and I've played Iuzand Iggwilv to death so there's no desire to go that direction either.

"Morgan climbed inside the chamber with his pistol but it went off accidentally shooting himself in the leg."

I so love fumbles! :) Even more fun than critical hits.

I like that idea Mike. I think we could do just as well with any "nomadic" group though. Imagine the fun we could have with a crusade type of campaign... Not really sure where we'd do that in GH that we would travel that far though. Marco Polo for inspiration maybe? He was gone like 23 years - traveled the length of the Orient and back to Italy. That'd be awesome. It may even work with our "average joe" idea too. Just simple merchants trying a gamble on opening a new trade route. It could work!

Great story but remember the ship has a port (left),starboard (right, bow (front),stern (rear)when identifying the parts of a ship or boat. I am a particular class a sea ranger, (a ranger with knowledge of seafaring)