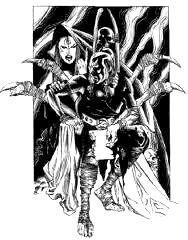 ﻿﻿﻿
...to witch-queen IGGWILV, mother of Iuz, demigod of evil and his half-sister the vampiric vixen Drelzna. Whether going by the name Hura, Louhi, Ichbilch or Wilva - no woman in Greyhawk canon has done more to build up and support her family. From conquering Perrenland to exacting revenge on her children's deadbeat fathers to penning a best-selling series of Demonomicons, Iggwilv is always in the background scheming for the future. Not even death or imprisonment in the abyss can keep this ambitious mother down. 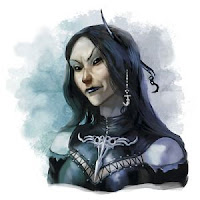 Iggwilv's legendary rise to Greyhawk infamy is especially remarkable when you consider she was once just plain Natasha, a simple village girl. That is until the day she was "adopted" by her new mother, the Mother of All Witches, Baba Yaga. Raised in the Dancing Hut, along with her goody-two-shoes sister Elena the Fair, the girl became Natasha the Dark. Now trained in the arts of magic, demonology, and womanly wiles, Natasha was unleashed upon Oerth by her foster mother. It is not recorded what happened afterward to Elena or any of the young witches who surely came before and after them, but it's safe to say Iggwilv is Baba Yaga's greatest legacy. 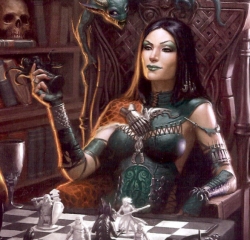 Iggwilv has always been a major interest in both my Greyhawk campaigns and my old Greyhawk comic. Here is a few highlights from her comedic misadventures:

Excellent mortellan! You fogot her alias of 'Tasha' while adventuring with the Company of Seven(?) as Zagig's apprentice. ;)

Iggwilv is the bestest of all those great Greyhawk villains! PCs in my campaigns hear rumors of her time again as they climb their own way up the ladder of fame and glory. Eventually, they come into direct conflict, usually to their own detriment. :)

I always like to use Iggwilv as a "Bad Gal" in my camp.

I know you're not responsible, but even after 5 years I can't believe they actually put this pathetic crap to print. How anyone takes the last couple years of paizo-hawk seriously is beyond me.

I don't know what you don't like about Paizo's Greyhawk adventures in the last Dungeon Magazines because you didn't offer any specifics, but I rather enjoyed Savage Tide, especially. Their inclusion of Iggwilv is just the way I use her - just weak enough to tempt the PCs to try to take her on, but powerful enough to own them and keep them humble. ;)