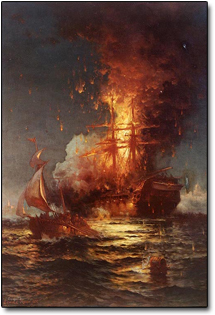 Welcome back to the high seas adventures of the Sea Princes. Last we saw, the crew of the Bird of Prey, (now captained by Victor Hammond) and Osprem's Kiss were headed back to Narisban for supplies before their long-awaited journey to find the Well of All Heals. An ill-fated storm had separated them however. Meanwhile Henri and Brother Pickles were rescued from a raft by the very privateers that had marooned them weeks ago. Things were about to get much worse. Here are our protagonists:

A mere day before the Keoish privateer Lydia's Light arrived back at the marooning isle, Osprem's Kiss had stopped by at Rennaud's request. He was worried about the offensive, marooned noble Lord Ronaldo Key and convinced Captain Cassidy to check on him before making port in Narisban. A search party consisting of Skullbreaker, Sasha Dirk, Half-Pint Moira and couple of Ospremites guarding the sage Olfon Trebus found the sea cave containing the body of Lord Key. After slaying an ambushing four-armed girallon with relative ease (Olfon shot it in the eye with a crossbow), they investigated Key's cave. All of Lord Key's possessions were gone including his shoes and Sir Aris' silver owl necklace which had led to his marooning in the first place. Marked on the wall of the cave, they discovered a cryptic message left by Key (which had incidentally been overlooked by Henri and Pickles):

"Whosoever finds my last request - Tell Margot in Baymouth to look behind her."

Key was properly buried by the Ospremites and with this grim information in hand they returned to their ship and continued on to Narisban to wait for Cpt. Hammond and the Bird. In Narisban the crew met a certain drunkard named Ellis Blackwood who claimed to have recently escaped a tiny island by raft and had some harrowing tales of pirates, four armed apes and an addled sea barbarian. Cpt. Cassidy was troubled by this especially since her crew had not found any other life on that island. She promised to return with the Bird and check again for their comrades.

As Osprem's Kiss sat in port, two other ships arrived at Key's Isle for the same reason. The Bird of Prey led by Captain Hammond and Lt. Tydan chose to pickup Key, figuring his punishment was enough. Unfortunately as insurance, Araxo had given recently freed Crimson Fleet pirate, Ironclaw McGrath coordinates for the same isle and told him of the wealthy noble marooned there. No one thought that McGrath would come there so swiftly. Sailing on portly Captain Yelloweye Stern's ship the Laughing Rake, the pirate crew came upon the Bird of Prey from the south. Not knowing Captain Rennaud had relinquished command, and Cpt. Hammond not knowing the Laughing Rake was only there to find Key, the two sides reacted hastily, raising their flags for battle! The Rake closed the distance while the Bird's dwarven gunner Jon Jamison targeted and tore up the pirate vessel with a few rounds of blackpowder cannon fire. As the Rake slowed and tried to return fire in hopes of boarding, they had not noticed the pair of launches sent from the Bird, coming in to counter-board their caravel! Amid a smoking, listing ship, Cpt. Stern rallied his men to repel boarders while a grim McGrath waited with still sore claw marks suffered from a vengeful harpy loosed on him days ago...

The daring melee was soon engaged on the deck of the Laughing Rake. A tattooed, maca wielding Cuahto and the fierce marine, Snorri Snorrison were among the first to climb over onboard to face down the harried crimson sashed pirates. Araxo Tydan, growing braver with each encounter, managed to pair off with the wig wearing, foppish Yelloweye Stern, while the daring Cpt. Hammond soon came face to face with Ironclaw; both were surprised to be sure. Tydan ran through and slew Cpt. Stern, his wig and tricorn hat falling away. The pirates looked to Ironclaw for leadership then and just as his cutlass and Vic's met, all around paused in their swordplay to see a third ship rounding the isle to join the fray: their common enemy, the pirate hunting privateer Lydia's Light. Hammond and Ironclaw quickly assessed the situation, the Rake was burning and holed beyond repair, and the pirates were bound to lose, but the privateers were mainly after the Bird as McGrath knew during his captivity. The two captains swiftly shook on an accord to become temporary allies against the Keoish vessel. Swords were sheathed and cheers rang out as both crews raced to their launches and rowed frantically toward the Keoish carrack while the Bird of Prey thundered cannons to cover their assault.

From the deck of Lydia's Light, confident Captain Rynn bellowed orders to his officers and flags were raised to engage with who he assumed was the notorious "Blackguard" and his Bird of Prey. Rynn would not let them escape this time. Standing out of the way of scrambling sailors, a shocked Henri Morgan and Brother Pickles gazed across the water at their old ship for the first time in many weeks suddenly aware that their comrades had no idea the two of them were aboard this ship too. They had to help somehow.

Game notes: This was the culmination of two sessions actually. One day between battles we were short a player so I had the guys play an out of chronological order scene as members of Osprem's Kiss on the island. For me, the way the various ships and crews' paths have intertwined has been the best part of this campaign so far. Who says splitting the party is bad? 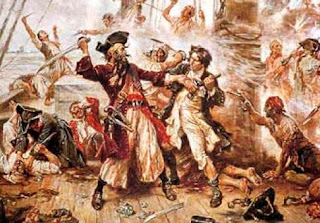 Mort, I know I've told you this in person but it bears repeating: This is the funnest campaign yet. You never cease to amaze me that you can come up with this stuff after all these years. Keep it up pal.

Right back at ya. I don't think we've had a bunch of characters with more chemistry in years.