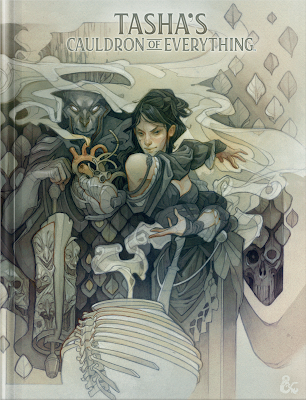 Ahoy Greybeards! I'm sure I don't need to belabor the news of Wizard's teased and now announced splat book Tasha's Cauldron of Everything. So I'll make some comments based on what little I know:
That's all for now. Once I have Tasha CoE in my hands, we will see how it measures up!
Posted by Mike Bridges at 8:35 PM

Always a pleasure to hear some good Greyhawk news first from your fingers, Mike! Thank you for sharing :D

Agreed on the artwork looking great. Not a big enough 5th edition fan to know how much of a sea change the crunch may represent, but it's certainly a nice nod to the game's past - and not the best-known parts of the past.

FWIW, there were a fair number of magical tattoos in 4E, although I don't think they showed up until Adventurer's Vault 2 came out. And 3rd edition had psionic tattoos, which were kind of the same general idea.

I note they're introducing "Shared Patrons" as a thing now. I wonder if that replaces "Factions" from the DMG? They never really did anything with factions anyway...

I am also glad to see Wizards giving Greyhawk some of the love it deserves. This is a sure purchase for me.

McGee: Good info. I was not aware of psionic tattoos, then again I am one of those ppl who don't subscribe to psionics even though its in alot of early EGG stuff.

Grognard: Well Joe, were factions meant to be an individual thing? I never could get play out of them beyond one session bc its additional book-keeping. Maybe sharing a patron is one of those time economy things?

Rod: Well it's up to us hard core fans to shout out (point out) the Greyhawk love sometimes. Lore genercizing has been rife since 3e and it's our job to keep it real lol.

Some interesting discussion has arisen at ENWorld about GH in the wake of the new announcement: https://grodog.blogspot.com/2020/08/for-the-love-of-greyhawk-reprise.html

I, for one, am not excited by this book, or any other books in the series. I get players coming to the game wanting to play some of the new class off-shoots that I know nothing about and haven't read up on. I can't keep buying $50 books to keep current with this game. I don't have unlimited funds to keep buying books. I'm tired of the "here's a new book with new spells and new classes and new races to play". Unless they are gathered under one cover, I'll never be able to keep up.

Puff: That is a legit concern. It was certainly 10x worse during the 3e splatbook craze. I had to get off that rollercoaster during 4E and kept using my 3E books. 5E seemed like a better investment moving forward, but yeah I noticed that $50 price too. I try to be choosier what I buy. I justify buying an occasional book now by reminding myself I never buy those extravagant special editions, I haven't been to GenCon in years, and I pretty much stopped buying minis. I also dont buy books or pdfs that don't compliment Greyhawk (ie I don't collect Eberron, Exandria, etc). If one of my friends happen to get the book I'll consider it, but thats on them to bring it to the table. Less is more with me.