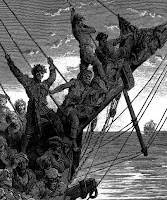 Heya Greyhawk maniacs! By now you've already seen my lengthy series of 2E Greyhawk Wars posts. I've been having fun going through all my old, notes, maps and even drawings, trying to piece back together our games from the 90's. Sometimes I run across stuff that is over the top. "THE SHIP" is one of these crazy things.

Somewhere between our Bandit War (618 CY) and the Iuz-Furyondy War (627 CY) was something I called the "Border Wars" which judging from my dearth of notes, was a bunch of left over skirmishes from all the previous wars. One such conflict was the Battle of Bellport Harbor. Putting down these pesky border wars was one thing my friends' characters had to contend with, but being high-level, they had ample resources to deal with their enemies in a let's say, disproportionate manner. As I've written many times before, my friend Brian was the player of the elven archmage Mortellan, and Jayson played the barbarian hero Valkaun Dain. Both were involved in several of the aforementioned wars either directly as conquerors or behind the scenes. In order to deal with so many unruly nobles or aspiring warlords across the wide Flanaess, they created THE SHIP. Have a look at this sketch I did. It looks like a galleon with a tower on the back yeah? Well read on... 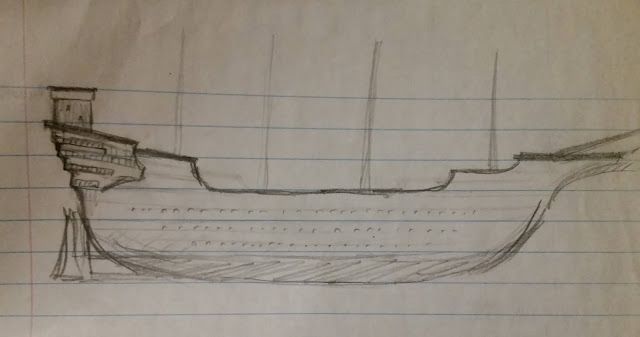 Mortellan was mostly responsible for crafting this monstrosity of a vessel since it is an enchanted "item" and it was built in 619 CY at a port in Ilshar (former Scarlet Brotherhood), though I wager Valkaun lent a hand financially. THE SHIP is not a galleon though, it's a flying fortress. Yes, a flying ship. Remember this is Greyhawk, not Mystara or Spelljammer, so we never had levitating/flying ships in our campaigns before and haven't since then I'm fairly sure. I assume since I drew a rudder it spends a lot of time in the water to remain unassuming. Mortellan basically created a magical SHIELD Helicarrier. I call it THE SHIP in this article because that's what it says at the top of my notes and in timelines. I suppose Mortellan gave it a proper name, I just can't find a reference. Also why didn't we think of anything catchy like "flying fortress". Ah well.

Quick note: For statistical purposes we used the excellent article High Seas by Margaret Foy from Dragon #116. If you haven't seen this, it's a must have for detailed maritime adventures. So looking

back on Foy's article, the largest vessel is the "very large" 17th-19th century era Ship-of-the-Line (1st Rate) and the Naval transport, both at 200 feet in deck length with a width of about 60 feet. THE SHIP makes those look small by comparison. THE SHIP's stats are thus:

What's a mangonel you ask? Well that's a real world problem. In the High Seas article Foy writes: "Mangonels are direct-fire artillery engines that use small, round stones of lead shot for ammunition. They are powered by torsion, either from twisted thick ropes or heavy metal springs. Mangonels are used since arced fire was generally not possible aboardship."

Since this was written back in 1986, it seems historians now say mangonels are just early versions of trebuchets, not direct fire engines like ballista. Well back in the 90's THE SHIP was using Foy's direct-fire mangonels AND ballista (since like Oerth isn't supposed to have black powder cannons and stuff) all from a levitating platform. Throw in gravity and THE SHIP can annihilate a keep or army in just a few volleys. Also, Valkaun Dain notoriously would drop "fireball" necklace beads from these heights for even more area of effect (I blame Greyhawk Ruins). Direct-fire or not, the fact THE SHIP can fly made the type of armaments meaningless in a D&D context. The guys could've dumped logs or barrels of oil off the side and shot flame arrows. Who knows?

Additional notes: Want your own "THE SHIP"? In 2E construction rules, it cost 537,400 g.p. to make and enchant. Probably cheap by today' standards. But here is some of the ingredients needed in enchanting THE SHIP (cause in 2E you had to put in the work)

Nice to-do list, eh? Making this vessel was probably more fun than using it in the end. Anyhow, THE SHIP operates with a permanent Levitation spell controlled at will by the wearer of a linked magic ring. This ring can also steer THE SHIP instead of the pilots wheel. I'm not sure what the payroll for THE SHIP crew is, but it has to be costly to run, which is why it never saw much use in my game. At the end of our 2E campaign, I'm not positive what happened to THE SHIP. It certainly never saw its match in combat (though dragons could take it down I imagine). I suspect Mortellan took it with him to the Sea of Dust when he went into self-exile to avoid the headaches of Flanaess wars and politics. If anyone else has used flying ships in their campaigns, I'd love to hear about it. Until next time!

Great detail for just a "sidetrek" battle lol! Love it!