Greetings Greyhawk mavens! This weekend I have an old game map to share! My 2E era vault of game stuff is very deep. As you saw in my recent 2E Greyhawk War Campaign series, we played more in that era than any other time period. In addition to great wars, high adventures and epic level characters, I hand drew a lot of maps. In this campaign, the Thillonria Peninsula was heavily featured and I mapped all of it using hex paper for a zoomed in view (1 hex = 10 miles). One extra area I did is a big island, about 180 miles off the north coast of the Ice Barbarians which first appeared in the Glossography map here:

I always wondered why this blob of a land form never made it into Greyhawk canon, maybe except that it was cut off in production of the Darlene map. It's definitely not too far away to be discovered, unlike the many islands strings to the far south. It's on the Icy Sea so I can imagine its not easy to get to, but I find it unlikely the hardy Cruskii raiders who go all the way west to Blackmoor and the Land of Black Ice cannot reach this place right above their home. So as part of a long forgotten plot, I had the players venture to Isalund "the Dark Isle". Yes, Islaund, I admit that was an unfortunately lazy name for an island, but I've yet to hear anyone else name this island? If someone has info on the island or their own name, I'd love to hear about it in the comments section. 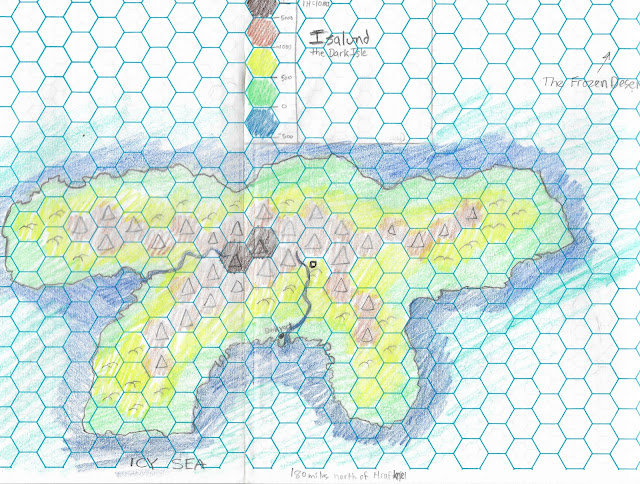 Observations and memories:
Isalund is called the "Dark Isle" I believe because I set an ancient relic of Tharizdun here, and due to whatever effects it had, the island was considered cursed, that's why no one hardly ventures to the place. I don't yet recall what the item was (or maybe it was an avatar?), but Big T is everywhere!
On the south shore is a dot of a village named "Dokyard". This cove settlement is probably the only accessible part of Island.
I used color to show elevation. Isalund is a rocky spur overall but still rather broad enough for more settlement. I'd say it's about average 210 miles by 90 miles in size. Quite big.
To the northeast I have an arrow pointing to "the Frozen Desert". I assume this is where the Icy Sea becomes one massive ice sheet melded into the arctic circle of Oerth.  I'd love to see what others have done with globes of the planet and where Isalund fits in this sea zone.
Straight north from Dokyard up an icy stream is a marked fort/tower/keep. I really don't recall what this was and it regrettably isn't labelled. This is surely the cursed location the PCs were trying to find as it's conveniently centered in the Dark Isle. If I find more on this place I'll post an update.
The label at the very bottom margin says 180 miles north of Hrafknel. I don't know anything about this town except it's a Cruskii settlement. My Thillonria maps have many custom settlements like this, including the home of my friend's famous barbarian war hero Valkaun Dain. Maybe someday I'll develop these parts again...
That's all I got on Isalund. This isle is too big to go unnoticed in the Flanaess. I hope others have noted its existence and have tried to use it besides me. Enjoy!
Posted by Mike Bridges at 9:33 PM

A fun development, Mike, and it's always cool to see where and how you take the setting in new ways.

I'm not as familiar with Fireland in general, so what relationship would you see between Isalund and Fireland, if any?

grodog: There would have to be something historically I guess. Though Fireland is probably quite quite far away. I'll have to confer with Carlos Lising and Anna Meyer on that.

This is the fun kind of thing Gygax would've loved.
Creating something of your very own!
A neat little look at an isle I knew nothing about, previously. Had never, ever noticed it there.
I think the thing I like most about that particular map is that it doesn't look like it's limited by square corners of a sheet of paper. I've always felt the Thillonrian peninsula always fit a little too tidily into a corner.

But you did a great job, even back then. And honestly - everyone has given something a less-than-imaginative name before. *Everyone*.
Even Gygax.