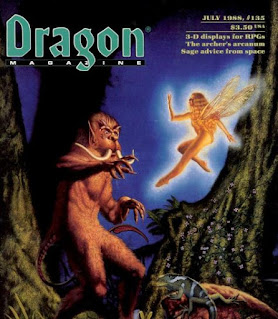 Hail Greyhawkers! I love going back through old Dragon Magazine issues and reading stuff that I may have overlooked back then. I don't know about you, but my Dragon reading was sporadic if not targeted. If it wasn't the Comics section, Forum/Letters, a Greyhawk article like Suel deities by Len Lakofka or some new D&D content like spells by Ed Greenwood, then I was skimming by it. What did I miss in 1988's Dragon #135? Well, with the benefit of 33 years of hindsight I missed some quite interesting stuff. James Ward, Rose Estes, and R.A. Salvatore. Check this out:

The Game Wizards by James Ward

Readers speak out on GREYHAWK® Adventures

"I asked for feedback in The Game Wizards column in DRAGON® issue #129. So, what happens when 511 letters come to my office, all filled with great and not-so great ideas on what should get into the GREYHAWK® Adventures hardbound book? I read every one of them. Let me tell you, most of the handwritten ones, especially the ones with horrible penmanship, were a real chore, but every one was read and some of them had ideas that are being put into the design of the book. Let me fill you in on the best of these."

Okay, gotta interrupt here. Anna Meyer and Jay Scott had James Ward on stream several months ago and his insights on the creation of Greyhawk Adventures were fun. I don't believe he mentioned Dragon Magazine feedback in the book's creation. 511 letters from fans? I don't think I've ever heard anyone in the community tell me "yeah I wrote a letter to TSR on what should go in GHA and my specific idea got picked!" It sounds like mostly generalizations here, but clearly some people got rewarded for their effort. Back to the article...

"Many people wanted zero-level PCs. Adventurers are not hatched ready to go; they undergo a bit of training in several areas before they find their niches. The rules on this character-creation system will cover experimenting with different classes and even keeping some powers from other classes (at a penalty of losing experience points on adventures).

A good many people wanted to know about some of the more unusual geographic features of the planet Oerth. There is now going to be an entire section in the book on this topic. Oerth has islands that float with the currents of the sea. Each of these places has become the lair of fierce monsters that need the islands traveling ability to enter new feeding grounds during the year. These monsters also have unusually large treasure hoards. Imagine, too, a strange magical pillar that greatly heightens the powers of any magic-user who touches it but the more spellcasters who touch the pillar, the less power the artifact gives to each. Naturally, one person seeks to have all the power; rivals must be eliminated!"

This I can believe. My favorite stuff in that book is the mysterious geographical locations. I'm having a hard time recalling what pillar he is referring to though, anyone else?

"I was very surprised to see that hundreds of you wanted adventures in the book. Several sections will now have adventures patterned after REF3 The Book of Lairs; these adventures range from zero-level, easy-looking things like loading a hay wagon to high-level adventures for only the toughest of heroes. Each one is designed to provide hours of fun for PCs and DMs alike. Some letters confirmed my suspicion that several sections scheduled to be put into the hardbound would indeed be popular. There was a clear majority in favor of putting in new monsters from the WORLD OF GREYHAWK fantasy setting; the same went for characters and spells. I would be in trouble, too, if I didn't put in magic items especially designed for the WORLD OF GREYHAWK setting."

I never owned the Book of Lairs. I'd like to compare this now. Monsters, spells and magic items of course are faves of the book today. James wraps it up...

"I'll close out this section by saying that I appreciated the thought and effort that went into all those letters from you, the readers. My eyes especially appreciated the typed letters that came in. Yes, I will send out free copies of the book to those whose ideas I liked and used. No, I don't need any more ideas on this project, but I will still read your letters not because I can use the ideas, but because I think your effort merits a little work on my part."

James had told us on stream, this book had a VERY fast product time. And there you have it, somewhere out there Greyhawk fans have free copies of GHA. Jealous! Let's move on now to another section of issue #135. This one blew my mind. I almost NEVER read the novel reviews and video game reviews. In this issue we are treated to a head-to-head review of a Greyhawk novel and a relatively new author's humble Forgotten Realms novel.

The Role of Books by John C. Bunnell

"Rose Estes' third GREYHAWK® Adventures novel and R.A. Salvatore's first tale of the FORGOTTEN REALMS setting share more than common ancestry in the worlds of gaming. Both focus on multiple rather than single protagonists, and comparing the two authors' craftsmanship offers practical insight into the process of developing successful characters."

I'm already cringing that they are being compared. No, like most Greyhawk fans, I'm not a fan of Estes' novels. It's scary to think she was on her third book before FR really got going. Back to the review...

"The Demon Hand is the third book in a trilogy about Mika, a Wolf Nomad drawn by accident into an intricate web of demonic intrigue. That's fine except that Mika is out of action for most of the book, caught in a snare he cannot bypass. Estes instead builds the body of her tale around his harpy daughter, Chewppa, and TamSen, the son of TamTur, Mika's wolf companion. (The mind boggles at the genetic possibilities for the next generation.) Unfortunately, none of these would-be heroes will win much sympathy from readers. Mika, as in earlier books, is too much a victim of fate to be heroic. Chewppa suffers from a comparatively small role in the plot and a serious language barrier. And TamSen, who is really the star of this book, must compete for center stage with Mika and Chewppa as well as with his twin sister, TamLis, who abruptly changes roles at the novel's close. Estes has written this tale with a strong narrative presence. Description generally prevails over dialogue, and the texture of the writing is that of a historian, not a poet. The result is a sense of distance between the story and the audience a real problem in the absence of a strong central figure."

Brutal. How about Mr. Salvatore?

"R.A. Salvatore takes a different approach with The Crystal Shard, a novel with an equally generous cast. His narration stays closer to the events it describes, rather than stepping backward to comment on larger contexts. More significantly, Salvatore deals with his characters in twos and threes rather than by themselves, so that dialogue and action, not description, convey the heroes' personalities. Though the barbarian Wulfgar is initially a reluctant captive in the relative civilization of Ten-Towns, hard work and maturation forge him into a warrior strong enough to slay a legendary dragon (in a nicely crafted scenario, at that) and restore his own tribe's honor. Regis the halfling owes more to the AD&D game than to Tolkien, but his slightly unsavory sense of larceny makes his eventual part in saving Ten-Towns all the more entertaining. And Drizzt, the exiled drow, is handled with uncommon finesse and care. (Salvatore may be the first novelist to find a practical use for the traditional AD&D game alignment system.) These are individuals that readers will enjoy meeting and getting to know."

Yup, I definitely want to read Crystal Shard more than Demon Hand now. Note the part about Salvatore being innovative with Drizzt and alignment. Yes indeed, readers will get to know Drizzt. Alot.

"One other comparison is worth making. Both novels rely on demons from the Abyss for much of their villainy, and in this regard, Salvatore's Errtu is a much deadlier adversary. Errtu is diabolical in action as well as origin, where the blustering Maelfesh of The Demon Hand is little more than a major-league killing machine. (It's also unsettling that Maelfesh is supposed to be several times more powerful than the semi-legendary Iuz, whom Estes casually swept aside a couple of books back.)"

GROAN! Why Rose? Why?

"The Crystal Shard occasionally has rough qualities typical of a first novel (which it is), notably where the shard itself is concerned. Salvatore's writing loses confidence as he tries to get inside his villains' minds, but it is more absorbing by far than Estes' latest work. Estes is capable of better writing (see DRAGON® issue #105 concerning her Children of the Dragon); the Mika trilogy suffers more from carelessness than from true lack of skill. As the AD&D game's original homeworld, the world of Greyhawk deserves more consideration."

Well said sir! If only R.A. Salvatore had been moved over to save the Greyhawk novel line. But no, Drizzt took off and 33 years later, he is still writing. I'll leave you all with this ad from the same issue #135 for Rose's next Greyhawk novel The Name of the Game. Cringe. Oh boy, I need to dig this book review up next! Until then, thanks for going down memory lane with me! 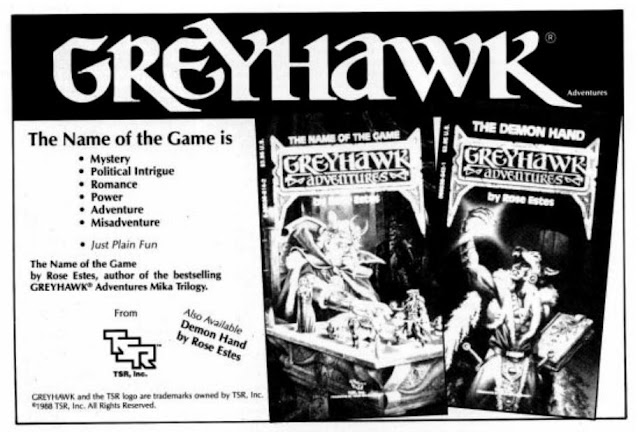 The Estes novels droveme away from Greyhawk. I read those three and that was it. I stopped reading fantasy fiction and have never been back.

I am tempted to return to it again, probably by rereading Gygax's Gord books. I gave away all the others, to include the first nine of the Dragonlance books, which I enjoyed.

Felix: I was never and still ain't a big reader of fiction in general so I kept my Greyhawk game (or Forgotten Realms for that matter) separate from novel canon. I loved Dragonlance too. Most of my collection is Tolkien though. I didn't read a Gygax novel until well in my 30's and I have never got thru a Estes novel by choice. I collect books now for the fun of it, but maybe someday I will try Estes out.