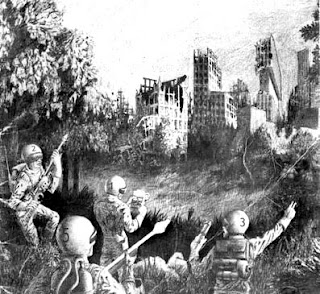 Welcome back Lords of Greyhawk to another installment of the Ring of Five Questions! Last time we put the wise and scholarly greysage Jospeh Bloch into the ring. This time however, I have summoned a legendary personage here to answer the five questions, Drawmij himself: James M. Ward. Mr. Ward is best known for his nearly two decades of work with TSR which included the classic sci-fi game Metamorphosis Alpha, post apocalyptic Gamma World, and the incomparable Deities & Demigods. Of course in Greyhawk circles he will forever be remembered for the excellent hardback sourcebook Greyhawk Adventures. More recently James has worked with Troll Lord Games and this year has embarked on starting his own RPG company along with Tim Kask and Frank Mentzer called Eldritch Enterprises. Okay, enough backstory, let's get James into the Ring!

Q1. I'm sure you know your way around the Darlene map. Which part of the World of Greyhawk is your favorite?

James: I have many fond memories about the city of Greyhawk and Greyhawk Castle. Gary made that part of the country come alive and I had the honor of learning how to play the game working with the people and places in and around Greyhawk city.

Q2. I ask everyone this next one. If you could be any one Greyhawk deity which would it be?


James: I am a Greyhawk deity, although I won't say which one.

Q3. Your hardback sourcebook Greyhawk Adventures is a classic. Was there any content or ideas left out due to space or editing?

James: I always work from very exact outlines. Everything in that book was planned to a T and nothing was left out or not added at the last minute. I had a lot of work in its creation, but I designed the product and it came out in budget and on time.

Q4. You're well known for your scifi and post-apocalyptic games. Do you approve of Greyhawk's history of genre mixing or should have it been solidly medieval.

James: That's an excellent question. Gary could do no wrong in my eyes. If he wanted to put a buried spaceship in his game I was happy to playtest it and get almost killed several times. I was extremely lucky to be part of his play testing group as he was designing his classic adventures. While lots of gamers know me for my science fiction, I've written more fantasy products than scifi ones. I like to do both.

Q5. Which module or book do you look back on as most influential to your more recent work?

James: Over the recent years I'm extremely proud of my Troll Lords products. TAINTED LANDS is fantasy horror and OF GODS AND MONSTERS is about various pantheons of gods, heroes, and creatures. Like everything else I grow better with the more experience I get in writing products.


* Have questions of your own for James M. Ward or other old school authors? James can frequently be found on the forums for the fansite Dragonsfoot. Check it out.


Update 4/25/2021: Eldritch Enterprises must be defunct, or their website. Either way, broken link removed. 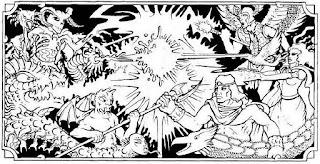 You don't disappoint with your guest. Looking forward to more.

Rafael, thanks for that link.

Excellent interview, Mortellan! You managed to corner the ineffable Dramij! And, thanks to you, Mr. Ward, for your time. :)

"More recently James has worked with Troll Lord Games and this year has embarked on starting his own RPG company along with Tim Kask and Frank Mentzer called Eldritch Enterprises."

I mentioned this in my own post on Canonfire! after hearing it from Tim Krask back in November, though I failed to remember that Jim W. was involved. I've corrected that now. :)
http://www.canonfire.com/cfhtml/modules.php?name=Forums&file=viewtopic&p=47745#47745

rafael: Great interview! Good industry questions. In a way I wish I had read yours before crafting mine.

Zenopus: And thank you for reading! James Ward is a classy guy who is fast to respond. I like that.

Wow! The ineffable Drawmij! Fantastic! I can't help but wonder how you do it, Mort!

Special thanks, also, to Mr. Ward for taking the time to talk to still-devoted fans. :D

A neat article, and very interesting. Especially the tidbits about the content of Greyhawk Adventures, and naming names with the gods.

Keep the ring of five alive. Oh and Ward easily made the best hard cover book on Oerth. He and Sargent helped shape Greyhawk in the 2E days.