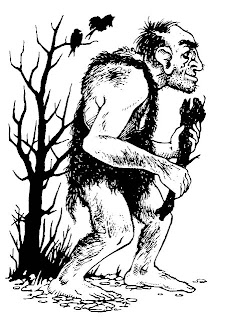 I don't know how this one almost slipped past me, but over at Wizards of the Coast there is a new adapted module in Dungeon 197 based on Gary Gygax's 1978 classic Steading of the Hill Giant Chief. As usual, you will need a D&DI subscription to download this 20+ page module. Chris Perkins the senior producer on this module is evidently a big fan of the Against the Giants series and has been wanting to adapt them since 4e started. He writes:

"In reimagining “Steading of the Hill Giant Chief,” I’ve inflicted some violence to the maps and encounters to make the adventure a fun and balanced 4th Edition experience, acknowledging that this creates some mapping challenges for Dungeon Masters with limited tabletop space. I hope that DMs with fond memories of the original read this latest incarnation and feel the same overwhelming desire to run the adventure as I felt back in 1980, when I read Gary Gygax’s adventure for the first time."
Objectively this version of the Steading is well composed. The stat blocks don't over power the rest of the content. It seems the evolution of 4e's module design process has improved. Much like the original there is plenty of places to search and discover like a good old dungeon crawl, there is fabulous loot to be had, and there is enough new twists here to even surprise someone who has played the original. The cartography by Mike Schley is top notch as well.
Written for PCs of 12th to 14th level, the module starts off with four different "hooks" called major and minor quests that PCs can try to achieve, for example freeing dwarven slaves or finding an abandoned temple. This cleverly gives PCs something to do beyond just hack and slashing their way through the Steading. Perkins has also chosen to retain one of my favorite parts of the old module, the random chart of mundane treasures found in giant's bags. Thumbs up there. I have to mention the module makes no specific reference to the World of Greyhawk not that it is necessary or relevant to an adventure that has always been iconic enough to work in any setting, but it would've been a plus. I will tease however that the module has a couple Greyhawkian easter eggs, so there is that (sorry gang, no spoilers). All in all the module is worth a look provided you have the subscription to get it. For Greyhawk completists who aren't into 4e like me, the adaptation is not too thick that it can't be retrofitted to previous editions on the fly.
As Chris Perkins mentions in the document, this is only the first of a series that will adapt all three of Against the Giants mods to 4e. So yes in Dungeon 199 there will be Glacial Rift of the Frost Giant Jarl and in Dungeon 200, Hall of the Fire Giant King. But before you call Perkins lazy, there is a new chapter preceding those that has me intrigued. Dungeon 198 will debut "Warren of the Stone Giant Thane". I can't wait to see what comes of this one, I'll keep you updated.
Update 4/25/2021: Fixed broken link to this adventure. I recently found Wizards puts all their old eDungeon and eDragon issues on DMsGuild.

One reference to being set in the foothills of the Crystalmists, that was all I caught.

Its nice to know why Greyhawk is always finding another reason why. Thanks for solidifying my reason Wotc. I said they will truly never leave it alone too much material worth utilizing.

Well, I'm glad that someone at WotC wants to something Greyhawk, but I'm not a 4e fan.