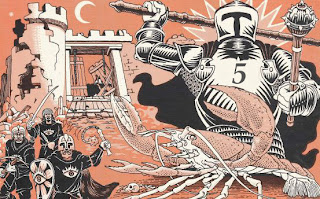 Sunsebb has come to the land Greyfriends, so to warm you up for the coming season I bring to you another installment of the Ring of Five Questions! Last time we waxed nostalgic with Living Greyhawk's Paul Looby and before that the inestimable Allan Grohe. Venturing into the Ring today is another old school devotee of the Greyhawk setting that you might recognize: Joseph Bloch. Joseph is known for his influential article, See the Pomarj --and Die! way back in Dragon #167 and currently his equally astounding gaming blog Greyhawk Grognard. Joseph hasn't stopped there however, he has also earned a loyal following for his old school dungeon crawl adventure Castle of the Mad Archmage and is now hard at work developing his own D&D rules system and fantasy setting entitled Adventures Dark and Deep. Hard working indeed! Without further ado, let's summon Mr. Bloch into the Ring!
Q1. I'm sure you know every hex on the Darlene map. What part of the World of Greyhawk is your favorite?

Joseph: For RPGing, I would go with the area from the Kron Hills to Urnst. That's where most of my own Greyhawk campaigns have been based, with Hommlet and Greyhawk as the centers. However, I've always loved the idea of doing a wargames campaign in the Iron League/South Province area. Those Dragon articles in the early 1980's describing the war there have always intrigued me. That would make one hell of a miniatures campaign.

Q2. Everyone gets asked this next one. If you could be any one Greyhawk deity which would it be?

Q3. Your excellent Pomarj article way back in Dragon #167 left me wanting more. Given the chance, what would have been your next article in Dragon?

Joseph: I would have loved to do a series on some of the more prominent cities of the Flanaess. What is it that makes Niole Dra distinct from Verbobonc or Chathold? Sometimes the differentiations in rpg settings are negligible, but I would really love to demonstrate through things like architecture, customs, dress, etc. that one city is really different from another.

Q4. You have an army going to war in the Flanaess. Which NPC (any class will do) would you choose as your general?

Joseph: Cobb Darg, Lord High Mayor of Irongate. He fights with his wits as well as his warriors.

Q5. You're no stranger to dungeon design. Which module (Greyhawk or not) do you look to for inspiration?

Joseph: The Village of Hommlet (TSR), The Temple of Set (Judges Guild), and of course Castle Zagyg: The Upper Works (Troll Lords Games). And it's no coincidence that two of those were written by Gygax. I know that large dungeon adventures are somewhat out of style at the moment (outside the OSR, at any rate), but I will always go back to the roots of the game to see what new twists can be put into the textbook setting.

Mort,
Yet another worthy addition to your blog. I agree with Joseph that each culture and city comes alive more when one shows and emphasizes the differences between them all. Until next time perhaps another ring of five.

Agreed. Another excellent interview. I hope this "series" of yours last for a long time to come.

Keep up the fine work, Mort.

Thanks guys! Be sure to follow Greyhawk Grognard, his stuff is a god read.

Mystic: I need to start working on my next batch of Q's btw.

I "check" Greyhawk Grognard two or three times a week. ;)

You'll get the questions "done," have faith in yourself -- I do! :D