Well folks I got good news, it's finally time to raise anchor on the Sea Princes campaign again! Though I didn't get much done during my short hiatus like I hoped, I did manage to come up with character sketches of the main players characters! For a refresher, here is some of the NPC crew from the Bird of Prey that I posted a while back. I hope you enjoy the art and look forward to more high seas action in the coming weeks. 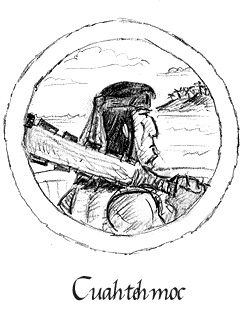 Captain Rennaud's ship the Bird of Prey is among the more progressive in the Prince's fleet, employing more than one 'savage' Olman as not only a regular deckhand but now as the primary lookout in the crow's nest. Cuahtehmoc is no slouch though, he has proven his worth time and again in both battle and exploration. With his deadly obsidian bladed weapon in hand, Cuahto is often seen at the side of first mate Araxo Tydan who enjoys a wide berth from the more surly members of the ship. Mysterious in origin, Cuahtehmoc hails from a region of the Amedio coast not seen on many maps found in the Flanaess. Whether they ever revisit his homeland again is up to fate. 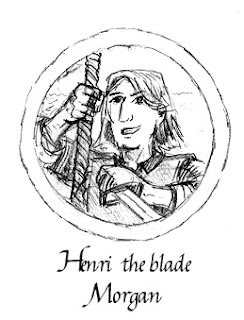 Henri Morgan of Sasserine was picked up by the Bird of Prey to fill out their crew after a sea battle with a Crimson Fleet pirate ship called the Hideous. Formerly a minor guard for the wealthy Taskerhill family, Henri proved his worth by joining in a stealth mission aboard the Hideous to rescue Anna Taskerhill from the clutches of Captain McGrath and his harpy pets. Since then Henri has shown a knack for short blades and a short temper in using them, which is why he was evidently eager to leave the comforts of Sasserine life. Whether Henri earns fame or infamy siding with the Sea Princes is still left to be seen. 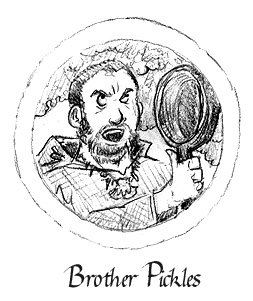 Brother Pickles is an enigma. No one knows his true name. He grew up on the docks with no known family except those who would give him food or teach him a skill. As an adult, most in the town of Port Toli know him as a slow-witted, rabble rousing cook with a penchant for strange recipes and cookware weaponry. Smart sailors recognize him as an acolyte of many transient priests including the equally delirious crank of a sea cleric Father Lork of Procan. As such, Pickles doesn't  profess faith in a single deity, but instead worships all the myriad gods of the sea and sky. This fact has made him valuable to Captain Rennaud on the Bird of Prey and has kept the troubled Pickles busy otherwise he would've done something crazy like commit suicide by now. 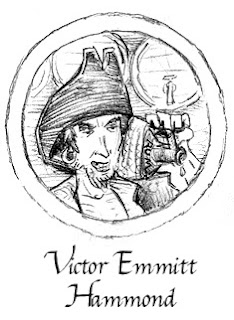 If there was ever an example of a salty, scurvy, rum-soaked, sea-dog on the Bird of Prey it is Victor Emmitt Hammond. Victor started life at sea young and has already seen many ports and many 'ladies' in other lands. His recent employ on the Bird of Prey so far has shown him the most action however. Victor's brand of swashbuckling bravado and flashy sword work has already earned him a promotion to bosun much to the rest of the crew's chagrin. Hammond however has higher aspirations to be a captain one day; and if not this ship then the perhaps the next. That is if he doesn't get himself killed first. Only time will tell. 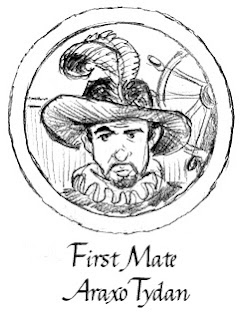 Araxo Tydan is the adopted son of the ruler of Port Torvin, Count Erasmus Tydan. As such he has never been in favor much with his greedy, plotting father. Always a  foppish, pest at court, Count Tydan finally relented to sending Araxo away on a voyage with one of his ships, the Bird of Prey. As the imposed second in command on the ship, the original crew is largely wary of this brat of a noble. Slowly he is winning some of the crew over to his side through his sly generosity, weaselly charisma and the hiring (or press-ganging) of new deckhands who know nothing about him or his side-dealing schemes. In addition to Cuahtehmoc the ranger lookout, Araxo is often seen with the only female on the Bird of Prey, the Scar Medorga, leading to many rumors and jokes behind his back. All the rumors are unfounded so far and if Araxo ever ascends to the captaincy there will surely be hell to pay (or a bribe).

Very nice. Glad to hear that "the boys are back in town." ;)

Yup! And look for their first encounter of the 2nd season later this week. It was short but harrowing.