Recently in my swashbuckling Sea Princes campaign I have come to a new, somewhat progressive opinion on the use of guns, cannons and other things that go boom. My resolve was only strengthened after a discussion a couple weeks ago during our weekly Thursday night Canonfire! chat. Here is my "canon" proof that intentionally or not, blackpowder weapons have slowly been leaked into the World of Greyhawk and should inevitably become commonly known in the Flanaess:

1. Dragon Magazine #71/1983 Glossography: Murlynd, an original character from Gygax's own home campaign is a quasi-deity with "6-shooters" (acquired from another plane) that only function on Oerth due to his "magical aura".
2. Murlynd is promoted to hero-god of Magical Technology in 2nd edition's Slavers. He has few priests but they can take a firearms proficiency and those who gain high level may use smokepowder normally implying they acquired the same aura as Murlynd.
3. 3rd edition's Dragon Magazine #306 introduced the paladin variant, White Paladins who can take the feat "Secret of the Firebrands" which is essentially the same ability open to 2e priests of Murlynd. There is a note in the article about Murlynd struggling against St Kargoth (the main death knight in Greyhawk) over an item called the "Quannon".
4. Dragon Magazine #263: One depiction of Delleb, Oeridian god of reason and intellect is of an armored warrior on a warhorse, carrying a sabre and a "strange projectile weapon of metal and wood". Delleb is also said to have invented the crossbow, a weapon of metal and wood that is not strange to any race of the Flanaess.
5. Daern, the Oeridian hero-deity of defenses and fortifications was sponsored to godhood by Delleb. She is known mainly for her magic item Daern's Instant Fortress,
but in Dragon Magazine #82 she is also said to have authored a book titled, "Components and Reactions of Phosporous".

6. Lastly, just for fun, the 1980 Folio/1983 Guide: Both covers of these books show the heraldry for the Fief of Ahlissa (once Flan now Oerdian) with three fuse-lit blackpowder bombs.
That is plenty of evidence, though there is many other references that have the potential to bring even higher technology to the Flanaess as well, such as City Beyond the Gate (Dragon #100), The Jungle of Lost Ships (1983 Glossography), Doomgrinder (shudder), the World Serpent Inn (Dragon #351) or Expedition to the Barrier Peaks(S3).

Now all this evidence is pointless because of some unseen power on Oerth supposedly prevents blackpowder weapons from working (Note it did not stop the more advanced weapons from Barrier Peaks from working). In order to use or even create  blackpowder weapons this effect has to be overcome. In my opinion, this effect is the work of the gods trying to control pace of development for their mortal worshippers. This is key because as you've seen above, certain deities see technology as a balance to magic and have started to leak their secrets to mortals. Murlynd's dogma says this specifically and he can easily unlock his mortal priests from the restriction. Delleb similarly wants teachers to pass on their rare knowledge to trusted students, and he does so to Daern who then writes it down in a book for her faithful to later discover. I postulate that blackpowder weapons have always worked normally but that the knowledge to safely create them is what is magically suppressed.
It is known in Greyhawk canon that the Epoch of Magic wanes by 998 CY. Perhaps it's the slow rise of blackpowder that contributes to this. What all this boils down to in a campaign sense is a pre-renaissance level Greyhawk where blackpowder weapons can be manufactured with strong limitations to preserve the feel of the setting. More on what sort of limitations I mean next time... 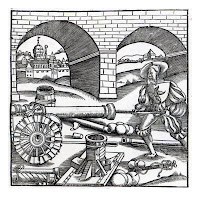 Not to mention the arquebus is listed in the weapons vs. armor class table in the original Greyhawk supplement!

Great write up Mort, just not sure if I am ready for BooM Sticks! in Greyhawk. Now Spelljammer is another thing all together.

Keep up the good work!

Evidence-based posting?! On teh interwebs?

Amazing how easily one can justify their decision for black gunpowder. I for one say no justification is needed if it works in your game use it. Besides pirates and guns go well together,but swordplay is the key.

Cuahto bought four masterwork pistols (yes, he is now penniless), shot all four nearly point blank and only hit once. Where's my Maca?

So, in researching things for a paladin (one of the White Paladins) in my home game, I came across this article.
Thank you, Mort, for your research here. It's invaluable.
Also, I was doing the research because I agree with you wholeheartedly. It's uncommon, but, firearms are definitely there.