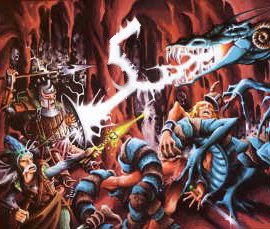 Welcome back and Happy New Year, Greyhawk mavens to another installment of the Ring of Five Questions! In the last couple interviews we were entertained with the old school insight of Joseph Bloch and blessed by the words of the great James M. Ward. Following in these big shoes is an author who is still rising in the RPG industry, and along the way has managed to leave his mark on the World of Greyhawk setting: Greg A. Vaughan. Greg started out freelancing in Dungeon Magazine, writing a module called Tammeraut's Fate and was also partly responsible for importing the classic adventure Isle of the Dread to the Greyhawk setting for Paizo Publishing's Savage Tide Adventure Path, a series that saw his heavy involvement including the climatic adventure Prince of Demons in Dungeon #150. From this humble beginning working in the Greyhawk milieu, Mr. Vaughan catapulted into even more freelance work for both Wizards of the Coast and Paizo Publishing on their highly successful Pathfinder setting. Greg is a member of the Werecabbages, a group of freelance RPG writers and is also an instrumental member of 3rd party publisher Frog God Games. Enough background, it's time to throw Greg into the Ring of Five...

Q1. As an experienced Greyhawk fan, you should know the Darlene map by heart. What land in the World of Greyhawk is your favorite?

Greg: Phew, this is a tough one.  Over the last 30 years I've had so many favorites that have shifted over time, it's hard to say.  Probably my lastest favorite area would be the Bissel/Ket Gap area.  There's just so much of Gary's early lore caught up in that area between the Expedition to Barrier Peaks and the Lost Caverns/Forgotten Temple stuff.  Plus it's the land of Iggwilv and has this neat East-meets-West (or in this case West-meets-East) vibe between the Baklunish and Oeridian cultures.  It's just a super rich environment for adventure and inspiration in my mind. In my home game I like to set Castle Ravenloft there in the lower peaks of the Yatils and run Bissel like Walachia and Ket like the Ottoman Empire and let the fur fly.
When I was a kid, though, the answer was definitely the Wild Coast/Pomarj area.  I LOVED the slave lords adventures and pretty much all my home campaigns eventually got around to that area at some point.

Q2. If you could be any one Greyhawk deity which one would it be?

Q3. Which author inspired you the most to write adventures for Greyhawk and later Pathfinder for Paizo Publishing?

Greg: Has to be Gary (Gygax).  I think I see a little bit of his stuff in just about everything I write.  Or at least I try to.  He's still my favorite, though there have obviously been a lot of great ones since.

Q4. You've written your fair share of Greyhawk material. Did you have any Greyhawk-themed ideas that didn't make publication?

Greg: Yes, I had a 5-part adventure series steeped in Greyhawk lore that I had pitched to Dungeon as a mini-adventure path that had the preliminary green light.  But the magazines were killed before it could get past the outline and discussion stage with James Jacobs.  I've thought about converting it to Golarion and pitching it as a complete adventure path to Paizo, and I think the conversion would work fairly well--there are enough parallels to make it work.  But in my heart of hearts I think it's always going to be a Greyhawk adventure.

Q5. You're shipwrecked on the Isle of Dread. Which Greyhawk NPC would you take with you?

Greg: Not Tenser...only his clone would survive.  Not Robilar, he'd just kill me and take my stuff.  Not Rory Barbarosa, people with him tend to get eaten. Probably Will or Tom Stoutly, 'cuz those dudes can row like nobody's business and seem like the kind of guys who will do what you tell them. And if you're stuck on the Isle of Dread, having somebody that's a strong rower has got to be a plus. 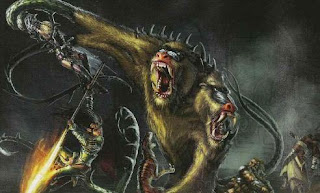 And thank you Mr. Vaughn, for taking the time.

A-W-E-S-O-M-E
I absolutely loved this installment! Great questions, Mort! And, man, you've got some really great inroads with people if you keep getting the names you do! Greg Vaughn! Wow! I think that my favorite stuff was when he was doing work for [i]Dungeon[/i], and wrote the [i]Istivin: City of Shadows[/i] series. I think that that [i]Touch of-, Shadow of-[/i] and [i]Wrath of the Abyss[/i] were three of my all-time favorite adventures from the magazine.

It's interesting to know that there was another arc planned, it's kind of a bummer that it got put on the back burner. I'd love to see it in Golarion, if they'd agree to put out a PDF that included a GH conversion for it. I can't say anything else except that this was a fine interview! Loved it!

I think your ring of five is probably your most successful venture yet.

Happy as always to read your blog.

P.S. Tell Greg to work on those rowing arms.

This one was a pleasant surprise. I wish Greg still hung out in the chats like he did when him and Holian were working on Isle of Dread. But hey, that's showbiz!

Years and years later, I look at that answer to Question #4 and find myself wondering if one of the many, many Adventure Paths Paizo's put out over the years is a descendant of that idea of Vaughan's.

Ah yes! Could be right! Writers and DMs tend to not waste content.