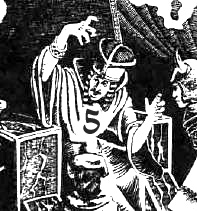 Welcome back Greyhawk fans to the Ring of Five Questions! Last time, we reminisced along with freelance writing whiz Greg Vaughan. Today should be a fun read as well. Sharing his time with us is an author who not only has a published Greyhawk article to his credit, but also has been dedicated to online Greyhawk fandom for alot longer than myself. Coming straight from my very own homeland, the prairies of Illinois (or as I like to call it Ullinois), is the sagacious archivist of Greyhawk lore and fiction: Scott Casper. Scott "Scottenkainen" Casper is a longtime presence on the Greytalk mailing list, well known for his work with Canonfire, the fanzine Oerth Journal and his richly detailed article, A Treasure Trove of Tomes in Dragon Magazine #253. Not content with just that, Scott is also a prolific writer of both Greyhawk and comic book fiction. Scott maintains a couple wonderful blogs; The Greytalk Archives and Scottenkainenland for those who wish to follow his ongoing campaigns and projects. Enough background, it's time to see if Scottenkainen can answer his way out of the Ring....


Q1. I'm sure you know my lead question. What land or region of the World of Greyhawk is your favorite?

Scott:  This is only going to be news for anyone who doesn't remember me from Greytalk.  Fifteen years ago, I decided to replace my City of Greyhawk campaign (based on the boxed set) with South Province (or what you might know as the Kingdom of Ahlissa) for a clean slate.  I ran that South Province Campaign for ten years for fourteen players (not all at the same time).  Though there are other contenders, I'd have to say that was the best campaign I ever ran, and that would make South Province my favorite land.
Q2. Another easy one. If you could be any one Greyhawk deity which would it be?

Scott:  Boccob, the Uncaring One.  Because then I wouldn't have to care.  I might still care, but at least no one would be expecting it from me.

Q3. I know how you really like Gygax's original Castle Greyhawk. How much has this megadungeon played into your campaigns and why is it such an enduring place to use?

Scott:  I bet you're referring to my “Castle Greyhawk” novella that I serialized on Greytalk for a long time.  At the time of my City of Greyhawk campaign, I was using a combination of WG7 Castle Greyhawk and WGR1 Greyhawk Ruins for the castle, and using it strictly for dungeon exploration.  By the time I was running the South Province Campaign, I knew more about the original Greyhawk campaign.  So when I included a time portal leading back to Castle Greyhawk in the recent past, the PCs were able to meet Tenser and Robilar while still adventuring there.  And I used the Castle more for roleplaying with famous NPCs.

Today, more information is available about what that first Greyhawk campaign was like than ever.  Message boards are dedicated to combing through every bit of lore for new information, or zooming in on photos of Gary holding up a Castle Greyhawk map, trying to read one more word that might tell us something new.  Lots of people don't want to dwell in gaming's past.  Gary never wanted to publish his unpolished notes for Castle Greyhawk (though Rob Kuntz has always been ready to).  He wanted to move on.  But for many gamers, the idea of being able to recreate (either at their gaming table or just in their mind) that gaming experience in its purest form is appealing.  It's nostalgia, but for something you never experienced - sitting around that basement table with Gary, Rob, and the gang and seeing a new medium of entertainment taking shape night by night -- and only wishing you had.

Q4. Your Greyhawk-centric article in Dragon #253 was full of great material. Did you have any other projects in mind to pitch to Dragon back then?

Scott:  In hindsight, I wish I had submitted more during that window of opportunity when Dragon magazine was interested in publishing Greyhawk articles.  I had submitted one other article, non-Greyhawk-related, about taverns and inns that was rejected and is now on my blog.  But for the most part, having already been in Dragon magazine, I focused all my energy on trying to be published in Dungeon magazine after that.  I made a lot of submissions to them, all of them rejected.  Some were rejected for some pretty weak reasons (“The Witch's Cottage” was rejected because it didn't promote the Complete Book of- series enough; the “witch” wasn't made using the witch kit).  “Lost Shrine of the Crystalmist” was almost picked up by Christopher Perkins, but was rejected after a lengthy period of editing and re-editing because he had just bought another adventure that ended too closely to how this scenario was meant to end.  It still kills me that Dungeon magazine was canceled before I got my chance to say I'd been published in both of them.

“Lost Shrine of the Crystalmist”, incidentally, almost had a second chance at life.  Rob Kuntz and I were, at one point (2005, I think), going to re-write this together for his Pied Piper Publishing company, but after announcing it on his message board he decided to drop the project.  I haven't done anything with it since, though part of the original version of “Lost Shrine” has been on Canonfire! for years.

Q5. You've been around the internet block. What personal contribution to online Greyhawk fandom are you most proud?

Scott: I've got a few contenders.  I'm very proud of the “Castle Greyhawk” novella and think it's one of my best works of fiction ever (I finished that back in 2007; it's currently hosted on fanfiction.net).  I'm also extremely proud of the “Gazetteer of Ahlissa” published in Oerth Journal #16 (also back in 2005; it's currently hosted on Canonfire!), as that was a parting gift, if you will, to my players as the South Province Campaign wrapped up.  I'm also very proud of “A Treasure Trove of Tomes” because, hey, it was in Dragon!

But I'd say my most important contribution to Greyhawk fandom has been the work I've put into the Greytalk mailing list all these years.  After the Greytalk Archive website disappeared years ago, people kept talking and talking about how someone needed to bring it back, but no one did.  So I decided to do something about it and I made the Greytalk Archives blog back in 2008.  It still only has a fraction of all the great material from Greytalk on it, but it's the only place on the 'Net right now where you can find well over 200 of the “best” posts from Greytalk all in one place. 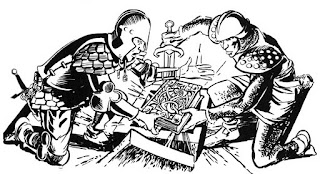 Woo! Thanks for adding value to my answers with the links! And what a wonderful W.O.G. tribute that was. What was I doing that week in 2008 to have missed it?

Excellent as always. I love these interviews; keep up the great work.

Thanks for the interesting and in-depth answers to the questions, Scott.

Another great interview. So Scott made it through the ring of five. Wonder who you will interview next?

As a fairly short time player in the South Province campaign, I can say it was among the most fun I'd had playing in Oerth.

Scott: It was a pleasure and I'm even more elated to have snuck a personalized cartoon under your nose after all these years.

Joseph: I certainly will. It's always a thrill to get an author to respond like you and Scott have.

eLarson: That's very cool, you're lucky to have played under Scott. The South Province is one area I've underused in all my years as a DM. To see Scott run a campaign for so long is right up my alley.

Great interview. Treasure Trove was an excellent article and really opened up my mind as a young DM to fleshing out the campaign world. To this day I love coming up with book titles to populate the shelves PCs are always rifling through.

Does the apparent prerequisite of having someting publised by wotc mean that we will never hear from some of the unsung heroes of the community? Or are certain people who aren't popular at canonfire anymore being purposely avoided?

All these years later I notice I had false information about my South Province campaign here. It's true for some years I thought I had run it for ten years, but when I went back and counted I discovered it had only been eight (must have felt like ten?).