Tada! Bonus material from my Sea Princes campaign! Here is a couple NPC profiles from the allied Lordship of the Isles vessel, Osprem's Kiss. I've been sitting on these drawings for a while until I had some of their character development out of the way, so without further ado, here is two of four from the Kiss. I'll present the other two later on. Enjoy. 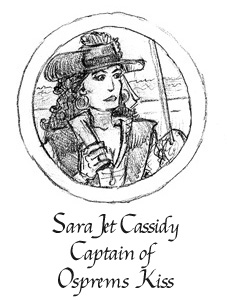 Sara "Jet" Cassidy is originally from the Sea Prince's Fairwind Isle. She is the daughter of a Holder sea captain and an indentured Rhennee seamstress. The nickname Jet comes from the dark curly hair she inherited from her mother. Taking more after her father, who had no sons he could speak of, she learned how to handle boats from a young age but never was allowed to go on long voyages. Often stuck behind in port with her mother and betrothed to a number of sailors, she ran away at the age of 18 to join a ship bound for the Olman Isles disguised as a cabin boy. The ship would come to be attacked by the Crimson Fleet's most dreaded captain, Dev "Cutthroat" Javell of the Malady.

Capt. Javell made many of the Holder sailors walk a plank and was stunned at the last to discover a woman among them in disguise. Smitten, the crimson sashed captain kept her as his own and sailed away for adventures unknown. Within a year, Cutthroat had to kill a quarter of his crew to solidify his claim to Jet. As his viciousness in her defense increased and his attitude to her softened, she soon relented to taking his hand in marriage. The two were married by a commodore of the Crimson Fleet in Scuttlecove and against all protest she was made first mate on board the Malady as well. All was perfect until she met the Blackguard.

While harbored in the neutral port of Narisban, she happened to meet the notorious Captain Rennaud and was swept away by his noble charm and mysterious vulnerability. When Cpt. Javell was alerted to her actions, he found them in a room together and nearly slew the Blackguard who narrowly escaped out a window. Sara was taken back to the Malady and shortly out to sea the enraged captain cut her wedding ring off, finger and all. Then in his last act of anger, she was bound and made to walk the plank that he swore she should've in the first place before he was cursed by her wiles. Leaving Jet for dead Javell made it his and the Fleet's vow to capture and kill the Blackguard.

Sara somehow managed to escape her bonds and drifted in the south sea until she was rescued by the female, privateer crew of the Duxchan carrack Osprem's Kiss. Several years later through hard work and bravery, she worked her way to become the captain as Sister Merci stepped down to be master of the vengeful ship. Now that her ex-husband and her one-time paramour both know Jet still lives, fate is about to cross their paths again. 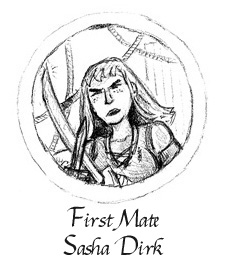 Brooding and sardonic in wit, Sasha "Dirk" hails from the Lordship of the Isles capital of Sulward. A freckled, street rat orphan since ten, she ran wild through the port town until she was pressed into useful service by the holy order of Osprem. Sasha however loved thievery more than religion and was impossible to train into their dogma. She did however take to the skills of seamanship and found herself working as a lookout for Captain Jet Cassidy on Osprem's Kiss.
Sasha was not only sharp with a knife or two, her keen eyesight helped the Kiss spot many an enemy ship from Onnwal to Dullstrand. As Sasha got older and more respected by the crew for her swashbuckling flair in combat she was soon promoted to first mate on her 20th year and was gifted a pair of throwing daggers crafted by Bigby the archmage of Scant.
On her very next voyage to Hepmonaland, Sasha was part of a trading entourage that went afoul with the natives. During the battle she was impaled through the heart by a javelin. Somehow surviving thanks to Sister Merci's aid, Sasha was thereafter dark and moody, left with a visible scar from her traumatic experience. She now claims that Nerull god of death owns half her heart and shuns any advances for her affection. Only death and pain amuse her anymore which seems to fit fine with the privateers of Osprem's Kiss.
Next time: Profiles on Half-Pint Moira and Sister Merci of Osprem.
Posted by Mike Bridges at 2:37 AM

That Sasha Dirk and Scar what a bunch of curmudgeons. Araxo won't let anything stop his binge drinking.